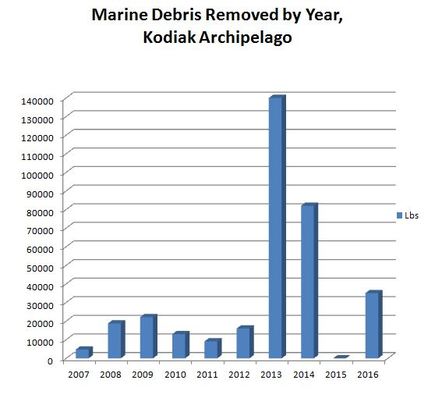 Established in 2006, Island Trails Network is the only organization in Kodiak engaged in on-the-ground marine debris clean-up and removal efforts throughout the Kodiak Archipelago.

In 2007, we first identified a need for marine debris removal on public beaches around Kodiak and launched our first community cleanup event, removing over 2,400 lbs of debris in one morning.   This event was the catalyst that led to partnering with the Marine Conservation Alliance Foundation to conduct an aerial assessment of marine debris in the Kodiak Archipelago in the summer of 2007. The objectives of the survey were to identify all deposits larger than one ton, all deposits of high recreational value, deposits near population centers and understand the relative distribution of marine debris around the archipelago.  Using a GPS enabled camera and donated airtime from the Civil Air Patrol, ITN staff collected 1637 data points through low over-flights.  The photos were scored and results posted online for viewing in Google earth. The study continued in 2008, but the flights were abandoned in favor of using the ShoreZone aerial photo database.  This baseline coastal assessment performed after the Exxon Valdez spill yielded 11,000 low-altitude aerial photos, most of which could be used to determine the presence and abundance of marine debris.

From 2008-2013 ITN partnered with the Alaska Marine Stewardship Foundation to conduct 14 marine debris community clean-ups around the Kodiak Archipelago removing 21 tons of marine debris from the marine environment while educating dozens of volunteers about the impacts of the marine debris phenomenon.  Cleanup sites during this period included Long Island, Halibut Bay and Sitkinak Island.

In 2009, ITN piloted the Set-net Removal program in response to significant accumulations of marine debris near commercial salmon fishing set-net sites along the western and southern shores of Kodiak Island. This innovative program was a partnership with salmon fisherman in Viekoda, Uganik and Ugak Bays of Kodiak.  Six participating fish sites conducted clean-ups during fishing closures and delivered marine debris to a participating tender vessel in conjunction with their regular salmon offloads.  Fisherman received compensation of per pound of $0.50 per pound of marine debris collected and transported. In its first year, a total of 3,700 lbs of marine debris was collected and removed.  The program was reintroduced and expanded in 2011, with 13 participants delivering 5,259 lbs.

The 2011 Tohoku tsunami in Japan claimed 19,300 lives and washed 5 million tons of debris into the sea. Of that, approximately 30% of the Japan tsunami marine debris (JTMD) remained afloat and was set adrift in the Pacific. A study conducted by Washington Sea Grant estimated that between 15,000 and 187,000 tons of that debris would make landfall in Alaska over the next few years, a prediction which seemed to be borne out by subsequent clean-ups and monitoring. Oceanographers initially estimated that it would take several years for debris to reach our shores, but certain types of debris began washing ashore in Alaska in November 2011, only eight months after the tsunami struck.

The Alaska Legislature immediately responded with $1M in clean-ups direct to the non-profit clean-up organizations, including ITN. Fueled by that funding, ITN began clean-up of the hardest-hit areas in 2013, eventually removing 115,000 lbs of marine debris from a nearly contiguous 73-mile segment of Shuyak and Afognak islands. In following summer of 2014, funds became available from a $6M "gift" of Japan to the United States dedicated to removal and disposal, however only about 5% of removal funds were ever allocated to Kodiak.

Meanwhile at the other end of the archipelago, during the summers of 2013 and 2014 we took on what was perhaps the largest contiguous deposit of marine debris in the western Gulf of Alaska, at Tugidak island.  Tugidak provided many challenges to our clean-up crews, beginning with the sheer length of the large catcher beach along the eastern shore (11 miles) and wind-battered interior. A two year effort funded by NOAA's community-based marine debris removal program collected over 80,000 lbs from 2013-2014, including marine debris from the 2011 Tohoku tsunami and the grounding of the Kulluk drilling rig on Kodiak island in 2012.

In 2015, a clean-up planned for Shuyak island (also funded by NOAA) was rescheduled for the following year due to delays in the grant approval process. That was the first and only year ITN did not perform significant marine debris removal. Instead, we temporarily shifted our efforts from removal to the ongoing region-wide disposal effort.

In 2016 we completed the Shuyak Island Community Marine Debris Cleanup.  That summer, teams of volunteers traveling the coasts by kayak removed 35,036 lbs of marine debris over a contiguous span of 45.1 miles of shoreline. Having compressed a two-year project into 120 days, we are nearly complete with the Shuyak effort and have only sorting, classification to complete the project.

Island Trails Network has a long and prolific history of removing marine debris from the shorelines of the Kodiak archipelago.  Though we are proud of past efforts, we are concerned about the rate of return of these plastic pollutants to our shores, and are working to develop projects and raise funds for further clean-up and removal, while also raising awareness about the issue.
Island Trails Network 326 Center Ave Suite 206 - Kodiak, Alaska - 99615 -  (907) 205-5222 - info@islandtrails.org
© 2006 - 2023 Island Trails Network, all rights reserved.
Please read our Privacy Policy.