Summary:  The goal of this project is to reduce entanglement and mortality of whales, Steller sea lions, and other marine mammals and increase awareness of the impact of entangling marine debris. This two-year project will engage volunteers from the general public and the commercial fishing industry in efforts to remove derelict fishing gear from prioritized locations in the Kodiak archipelago including Kodiak, Afognak, Shuyak, and minor outlying islands.

ITN is using small and large vessels teams to clean continuous stretches of shoreline around the port of Kodiak, a proven and effective method of addressing the worst-affected areas.

Another Part of this project is to reinvigorate the setnet program, which educates and engages the commercial fishing industry in the clean-up.  ITN is offering clean-up and safety protocols, bulk bags and other equipment for fishermen to survey and remove marine debris from coastal areas during fishery closures.
Funding Partners:  National Fish & Wildlife Foundation
In-kind Partners: Student Conservation Association | Ocean Plastics Recovery Project |  Matson Foundation | Alaska Department of Environmental Conservation | Alaskans for Litter Prevention and Recycling

In recent decades marine debris has become recognized as a pernicious threat to the marine environment and coastal communities of the Kodiak archipelago. Entanglement in and ingestion of marine debris impacts hundreds of marine species worldwide including marine mammals, and can have lethal and sub-lethal effects (CBD 2012). Physical contact with marine debris, particularly entanglements with net and line, is a significant cause of mortality of marine mammals, and poses a serious threat to the Gulf of Alaska ecosystem. Several of these marine mammal species are of important subsistence and cultural value to the Alutiiq people of Kodiak and other Alaska Natives.

Studies have shown that northern fur seals have a propensity to become entangled in fragments of trawl netting and plastic packing bands. Over a ten year-period on St. Paul Island, about 0.4% of young male fur seals observed had been entangled in debris (Fowler 1987). The Kodiak archipelago is within the winter range of the northern fur seal. Harbor seals, the only phocids in the Gulf of Alaska, are abundant and widely distributed around the Kodiak archipelago (Pitcher 1990, Small et al. 2003). Although long-term observational studies of harbor seals have been conducted at the south end
of the Kodiak archipelago (e.g.,Daniel et al. 2003, Hastings et al. 2012) few harbor seals have been observed entangled in debris during these studies (L. Jemison, personal communications April 17, 2017). However, phocids in other regions have been seriously injured by entangling materials (Allen et al. 2012).

Cetaceans are also threatened by marine debris in Alaskan waters. A study of humpback whales in northern Southeast Alaska found that 71% of whales observed had unambiguous scars due to entanglements in fishing gear (Neilson, 2006). Hawaiian Island Humpback Whale National Marine Sanctuary biologist Ed Lyman reported that a minimum of 20 humpback whales have arrived in the sanctuary entangled in fishing gear believed to be from Alaska. Lyman also serves on the Alaska Disentanglement network and has firsthand experience removing derelict gear from whales, citing longline and pot gear as the most common to entangle a whale.Observed impacts to the whales included lacerations from contact with rope, and malnourishment and exhaustion due to the drag associated with the entangling material during swimming and diving. (E. Lyman, pers. Communications). Similarly, a 2016 study on bowhead whales in the Bering, Chukchi and Beaufort seas concluded that of 15 reports of bowhead entanglements, four were confirmed to be caused by commercial pot gear (George et al. 2017).

Critical habitat has been established for the critically endangered North Pacific right whale, just east of Kodiak in the Barnabas Trough. A 2013 Alaska Marine Mammal Stock Assessment explained that the habitat designation is based primarily on sonobuoy detections, as there are believed to be fewer than 26 North Pacific right whales remaining, and sightings in the Gulf of Alaska are exceptionally rare (Allen, and Angliss 2013).

Finally, sea otters are denizens of the nearshore, and are also threatened with entanglement in nearshore fisheries. A 2002 study of the salmon set gillnet fishery in Kodiak, conducted by NOAA Fisheries,documented 4 entanglements, resulting in a bycatch estimate of 62 animals. A continuation of the study in 2005 estimated bycatch at 28 animals (Manly 2007). Gillnet fisheries pose a threat to other marine mammals, and were responsible for an estimated 84% of cetacean and 98% of pinniped bycatch in U.S. fisheries from 1990 to 1999 (Read et al. 2006)
References Cited
Allen, B.M., and R.P. Angliss. North Pacific Right Whale; Eastern North Pacific Stock (Fact Sheet). Alaska Marine Mammal Stock Assessments, Revised 5/15/2013. (http://www.nmfs.noaa.gov/pr/sars/2013/ak2013_northpacificrightwhale.pdf)

CBD 2012.Impacts of Marine Debris on Biodiversity: Current Status and Potential Solutions. Secretariat of the Convention on Biological Diversity and the Scientific and Technical Advisory Panel, Montreal, Technical Series No. 67, 61 pages. (http://www.cbd.int/doc/publications/cbd-ts-67-en.pdf.) 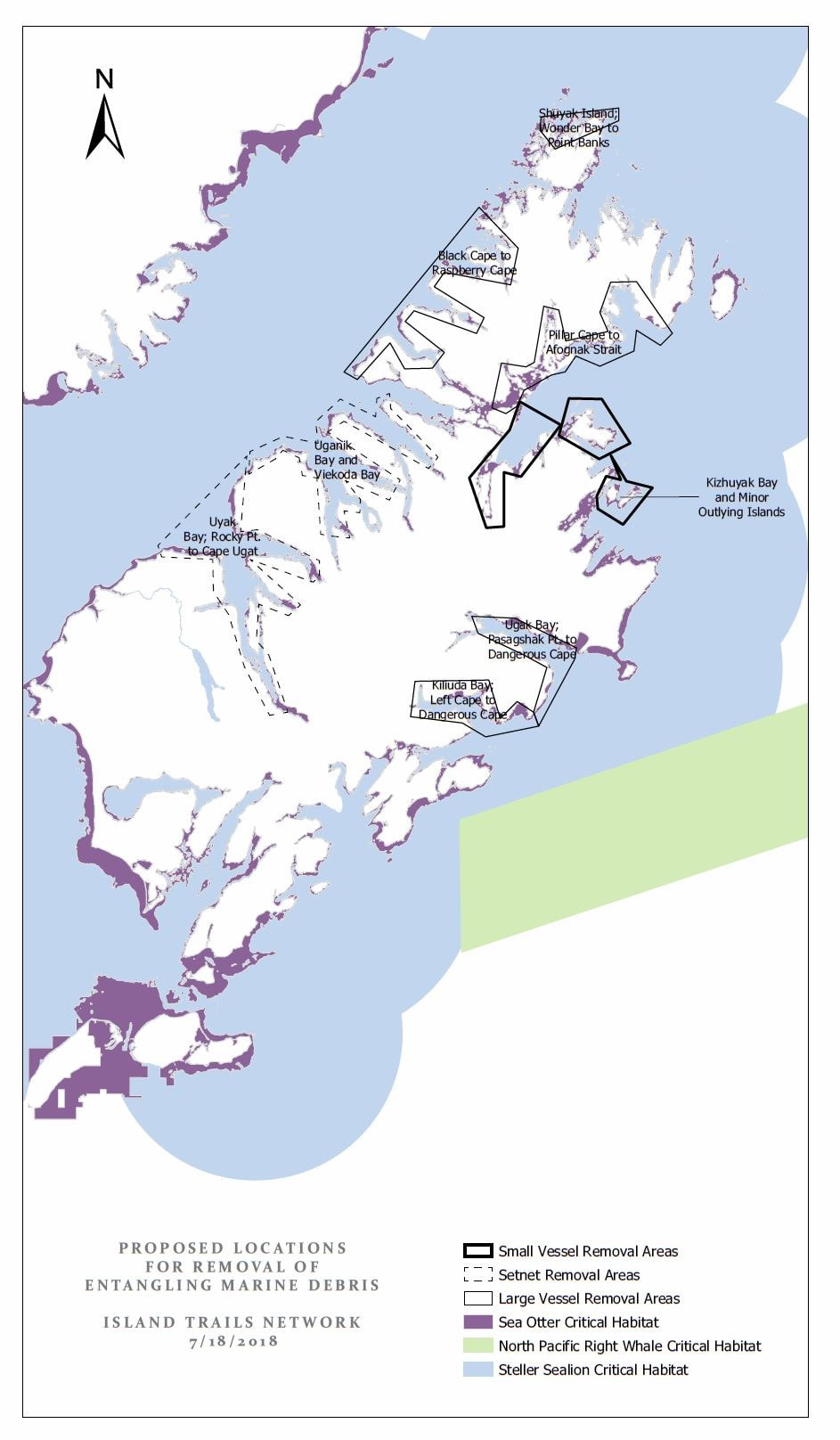